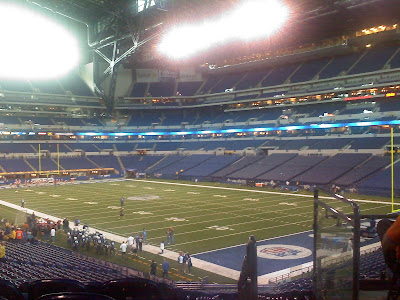 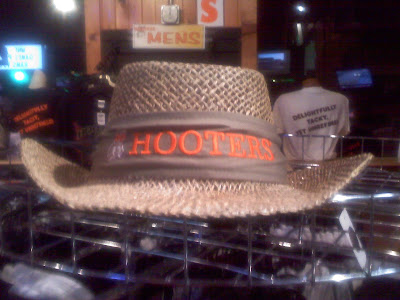 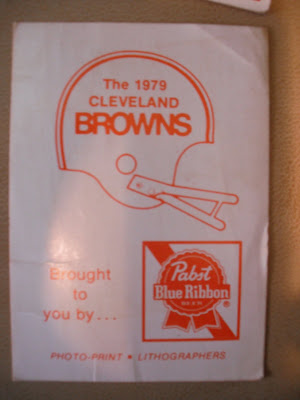 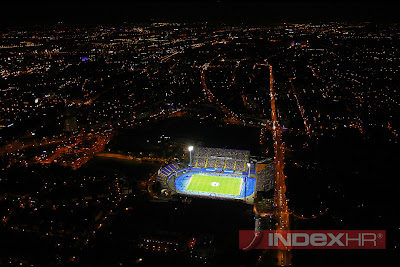 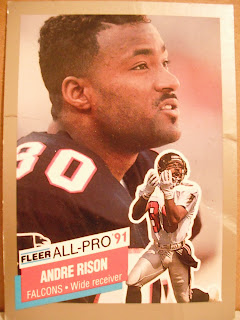 Damn, two shows in a week? this must mean i will not find another show to attend in the area for at least a month. As mentioned before the mall show was just that, a mall show. Nothing spectacular but then again, I wasn't expecting much.

the show I attended yesterday was a hotel show. I grew up going to these so they hold a special place. Sucked I could only attend for an hour due to the Browns game. Regardless, there wasn't many tables (I'd say 10-12) so I only needed 30 minutes or so. Would love to have looked through the vintage stuff a lot longer though. Next time.

My pickups are below: 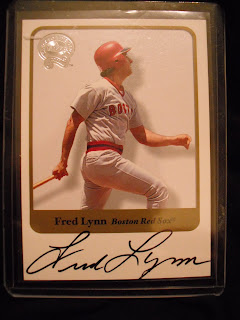 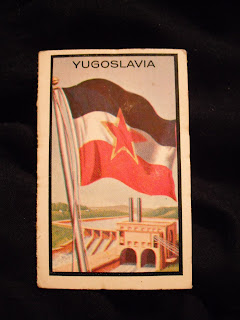 One dealer had this card for $3. I have no idea what it came from, but I'd like to find out (hint: help me out here!). All of these current "vintage" sets like Ginter all have flags in their sets, but this one is really cool. Completely defunct country and still the cause of many problems in that region of the world. Not to mention my ancestry is Yugo. 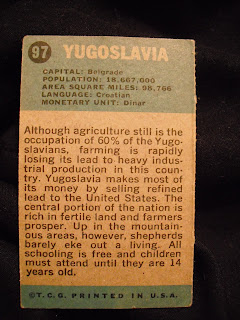 I love the back because it isn't entirely true. Many languages were spoken in Yugoslavia, I guess Croatian was the decision though. Serbo-Cro or Cro-Serbo would have been better, but whatever. I should try and flip it on Ebay talking about Beograd and Djokovic.
Posted by Andrew at 10:24 PM 2 comments:

I hope I make it out alive

First game of the season for Browns Football. Below is a summary of my day. If there are no more posts after this one, just want everyone to know I died doing what I loved....drinking PBR. 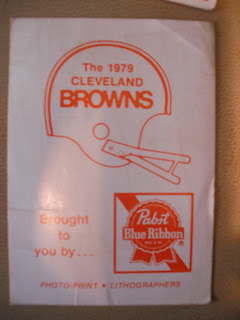 Card above sums up my day perfectly.
(And there's a card show I'm stopping at before the game....SWAGGGGG)
Posted by Andrew at 9:36 AM No comments:

Northeast Ohio usually has a Mall Card Show somewhere, at least a few times a month. Generally, it's run by one of three people, and everyone who is a "dealer" there also works the other shows. Basically, it's an exhausting circuit for both buyer and seller due to lack of change in product. And I bet for the sellers, it must get real annoying when nobody wants to buy stuff. Either way, I go to all of these expecting to see different things....(I should learn by now that I won't).


By far my favorite thing about Southpark Mall's shows is the dude who trots out over 100 McFarlane figures. Whenever I see his stand I say to myself, "shit, i really need to buy all of these and put them on my walls. Immediate thought after is when I have to explain to someone why I have plastic figures of dudes all over my wall....I'd like to try and steer clear of that situation, as much as possible. Unless a Drazen figure is ever made, then it's game over. Best figures ever made are the NHL Goalie figures, so good.


Most of the tables have a mixture of current and vintage product, along with the game used and autographed cards for sale at Beckett prices. No thanks. Give me the single cards for $0.10 all day....which is exactly what I had spent my money on today....for a total of $1.00.


My purchase was 12 of the greatest (if not greatest, top 5) basketball sets ever made. 1990 Hoops. I've been trying to complete this set for about three weeks now, ever since I bought 3/4 of the set a few weeks back for $1. I had no sympathy to the card shop owner at the bazaar who tossed away a National treasure for $1. I came out of there feeling like Pat Riley when he signed Lebron and D. Wade (Bosh is worthless). 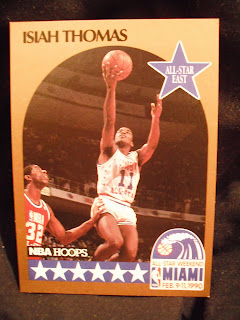 I
siah! Great player, completely inept front office worker. How he can still get a job with the Knicks is beyond me. More power to ya dogg. 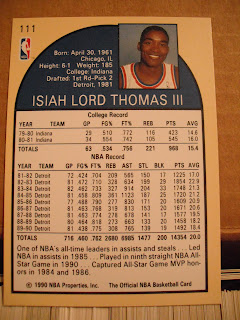 Did not know his middle name is Lord. Pretty legit if you ask me. 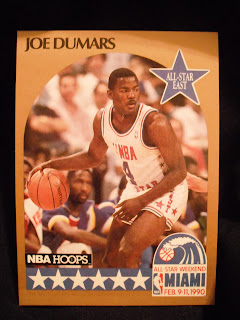 Dude was a baller in my video game world in the early 90's. Enough said. 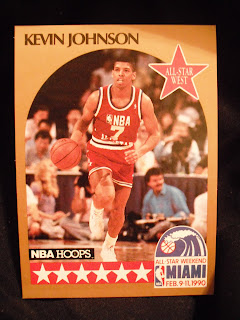 KJ was really fast in NBA Jam for Super Nintendo. Other than that, I got nothing. 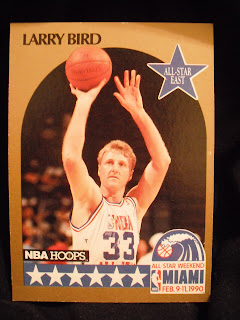 Larry the Legend. Never forget when the Celts played the Yugoslav team in the 80's and Drazen and Vlade tore them up. I pulled a solid base card of him a few years back where he looks like a total hick. Made me like Bird even more. 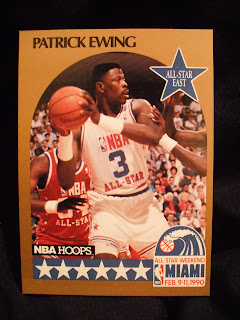 Patrick Chewing. Greatest Snickers commercial ever. Would love to have a Knicks 33 jersey someday. 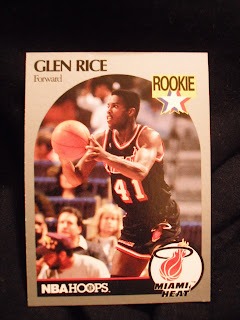 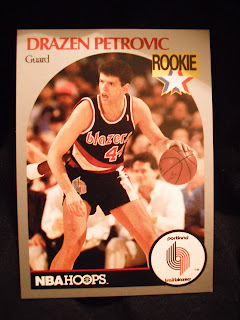 Basketball God. Greatest player to ever play (in Europe, sorry Sabonis). Any time I find a Drazen card, it's going to be purchased, end of story. I will visit Zagreb within the next 2 years to see his Museum. 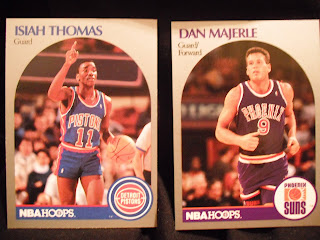 Problems arise when you think you need cards for the set but don't have your checklist. Said problem is usually called "doubles". In this case, these are doubles. Whoops! 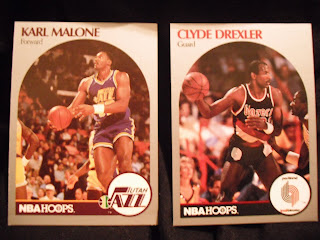 Karl and Clyde also happen to fall under the "doubles" category. Still great cards though!
Posted by Andrew at 12:26 AM 1 comment:

Email ThisBlogThis!Share to TwitterShare to FacebookShare to Pinterest
Labels: 1990 Hoops

I purchased these awhile back but never got around to showing them off. Adding these to the collection puts me at a total of 10 autographs from the 93 card set. For those keeping track (lol nobody) that's 10.75% of the autograph checklist done. 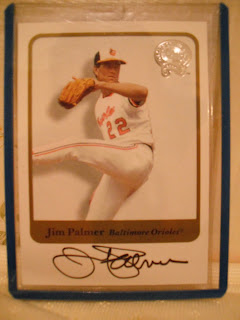 Cool Photo. Shitty signature. In total fairness, I couldn't careless, he's just another dude I need for my set. Also, a short print (/600). 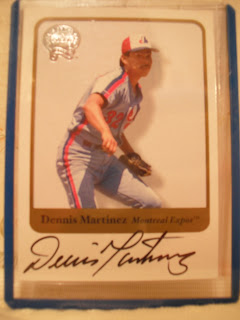 El Presidente. When I first saw this card I had to have it. I love and miss Montreal, and Dennis was a former Indian. 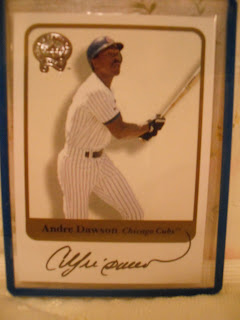 I grew up loving this dude. Cubs games in the early years of my life were a staple and this guy played a prominent part. I also had never heard of a guy named Andre before and thought it was the coolest name. 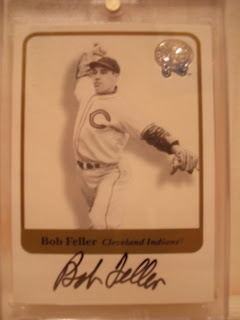 Cleveland Legend/God. Sad he passed away last December. I had the pleasure of meeting him several times. He could talk for hours and all I could do was listen. A lot of people said he was a grumpy old man, and I'm sure they were right. But for all the shit he had seen in his life (not to mention fighting in WWII), he had every right to be short with some people. I'm really sad I never got to ask him about his barnstorming days, eventually I'll get my chance.
Posted by Andrew at 1:24 AM No comments: