It's very much my luck to get nostalgic for memories from your youth. Hell, I would even guess that nearly all of us who collect sports cards and collectibles do it for nostalgia. Yes, many do it for profit, but they are few and very disillusioned. FYI, there are easier and better ways to make money.
My nostalgia has hit hard lately in the form of 1990's NBA cards. Unfortunately, everyone else has decided to rekindle their love of 90's NBA cards, namely the inserts. I've been wanting to buy a box of Fleer Metal around the time of 1996 through 1998. It won't happen unless I give a kidney up (note: I would).
Having said all that, I decided I would head to my local card shops. By local, I mean ones located within 50 miles of me. Essentially, this boils down to a bazaar, six three card shops. One sold all his cards and now does memorabilia. Unfortunately, this shop was my favorite, which was a shame because the guy is awesome and had the 86 Fleer NBA set for $599.00. Shoulda, woulda, coulda. the other two were near Canton, and are completely gone. No idea what happened to them, but the last time I visited it was 2008 and I bought a box of Moments and Milestones rather then spend $60 on a box of Fleer Metal from 96-97. Again, shoulda, woulda, coulda.

the bazaar is hit or miss. A few guys set up shop there and always take my name and number saying they will call and sell me their miscellaneous junk common/non rare inserts for dirt cheap. I've never received one phone call. If you are a bazaar worker in Cleveland, leave a comment and you will get my number. Use it please.

Other than that, I'm nearly out of options. It shouldn't be this hard, right?
Posted by Andrew at 9:36 PM 1 comment: 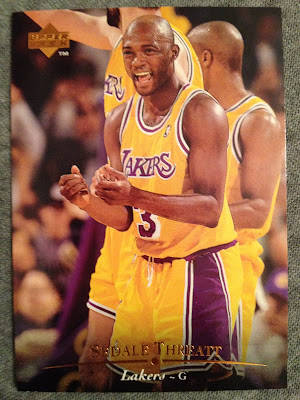 Posted by Andrew at 7:51 PM No comments: 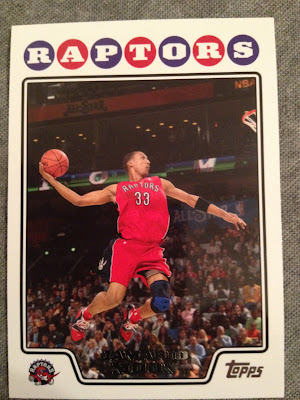 feat. Jamario
Posted by Andrew at 11:13 PM No comments: 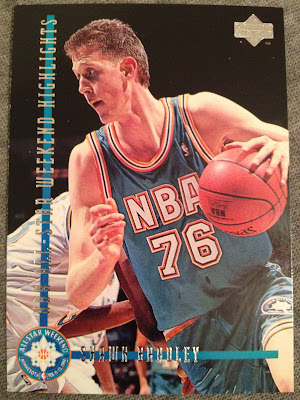 I love All Star Jerseys. I rarely ever watch the game. But the jerseys are some of the best things to ever be in sports, mid 1990's NHL third jerseys aside.
Shawn Bradley above epitomizes the sports landscape in the 1990's. How do we get fans excited and put butts in the seats, all while maximizing revenue even if the team is complete shit? Answer: Make the jerseys some form of teal. Brilliant. Countless teams did this. A few NBA All Star Games suffered from this epidemic. Ironically, I love both of those years (1994, 1996).
Shawn's photo is odd in that he was not elected to play in the Game in Minnesota. the photo is from the Phenoms (Kukoc, Radja, Lindsey Hunter!) played the Sensations (Bradley, Penny, Popeye Jones!, Calbert Cheaney!!!). No surprise the Phenoms won the game by 6.
Posted by Andrew at 5:46 PM No comments: 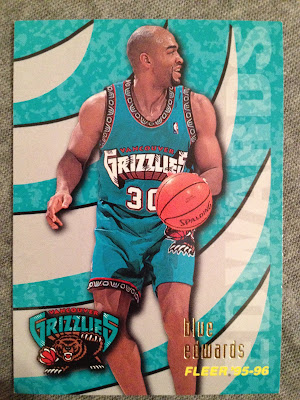 Posted by Andrew at 1:12 PM No comments:

What You Know About 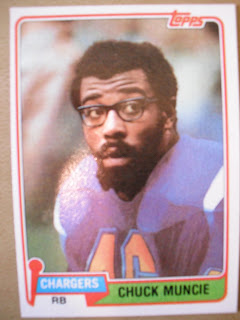 Just push play.
Posted by Andrew at 10:58 PM No comments:

In the last 3 months I've blogged maybe for a total of 10 minutes. And yet, I still get people coming here. Nothing of any substance has been pasted here since probably 2009. Maybe this year I'll give substance another go.
Until then, keep checking out whatever brought you here, and enjoy the random sports card images.
Also, if you have any Fleer Metal from the NBA in the mid 90's, I'd love to take if off your hands....not looking for Kobe RC's....I want Brent Barry doing a layup in the middle of a space robot battle against alien octopuses.
And of course, any and all Champion NBA Jerseys.
Posted by Andrew at 11:26 PM 2 comments: