I should not have gone

Around Northeast Ohio we have a group of collectors/sellers who partake in card shows at least 3 times a week. Locations are dotted around the East and West sides. I've been to two of them and each time nothing changes. In all fairness, I shouldn't expect much change when shows are within 2 weeks of each other.

I do think the shows will eventually become stagnant and people will stop buying tables due to lack of sales. these shows should be done monthly. Not every tuesday, thursday, and Saturday. I couldn't imagine buying a few tables, driving to a show, unpacking then repacking my cards....all for a potential profit of maybe $100. I asked one of the dealers how sales were today. He looked at me and said in a semi-depressed voice "been better". this sentiment will (to me at least) be the demise of these shows. I bought this card from the guy: 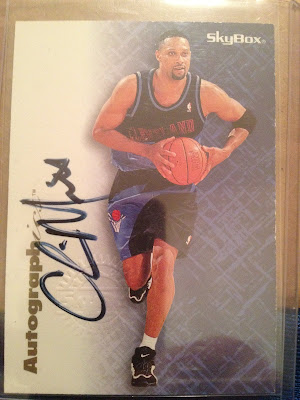 I am fortunate enough to have a problem of too many card shows. It's a nice problem to have.

the last show I went to was at the end of February. I debated not even going because I knew the stuff was not going to change. I went anyways.

I don't know what it is about card shows, but I don't like small ones where everything feels cramped. I walk up to a table, check out what's in the case(s) and more often than not walk away. this process lasts no longer than maybe 3-5 minutes. Rinse and repeat probably 15-20 times at each show. During these encounters, the card owner/salesperson is generally sitting there and watching me like a hawk. I hate these "exchanges" the most because a) it's uncomfortable b) it makes me not want to buy anything or c) these types of dudes are usually complete assholes.

If the card sales person doesn't say anything to me I often wonder what they are thinking while I'm glancing at their cards. What goes on in these people's minds? Instead of engaging in conversation or at least inquire as to what I am looking for (if anything) or ask what I collect, you just sit there. It is odd. Granted, I'm sure these people are just burnt out from people looking at their stuff without purchasing.

Like I said earlier, I got to the show relatively late. Actually, no, I got there at 2. Show ended at 4. the total amount of "customers" at the show was probably 20. there were more tables than people. I feel bad for these dudes. they market via facebook and craigslist. I have never seen signs on any of the big message boards. But at least the promoter tries. But only 20 people? Yikes.

What was worse was that some dudes were even packing up or already gone. I understand not wanting to endure another two more hours of wasted time, but at least stay. You never know if you have something someone wants (hint: nobody is ever going to buy those desert storm trading cards, just pitch those). I guess you could always spend free time at the show by posting cards on Ebay.

Anyways, I was there for one reason. I wanted to buy a Pokemon card. I had seen one in this guy's huge box a few weeks prior, and I assumed it'd still be there at this show. I was right. He was closing so I asked if he would sell the entire box (about 90 cards). He said $130. I did not have that kind of money to spend. I also would not have spent $130 on Pokemon cards either. I spent $5 on 5 cards. He also had a pretty nice Delonte West (my all time favorite Cav) patch/auto card. I spent $5 on that. 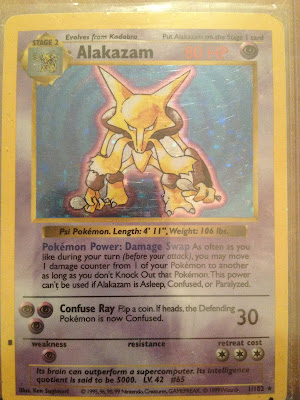 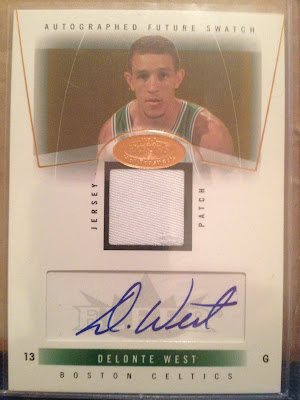